Simon is a Professor of Molecular Evolution with research interests in molecular clocks, evolutionary rates, phylogenetic methods, genomic evolution, and molecular ecology. Since co-founding the Molecular Ecology, Evolution, and Phylogenetics Lab in the School of Life and Environmental Sciences in 2011, he has supervised more than 30 Honours and PhD research students.

Further information can be found on Simon’s University Profile Page and on Twitter @DrSimonHo.

Simon has published more than 230 scientific articles and edited the book The Molecular Evolutionary Clock. 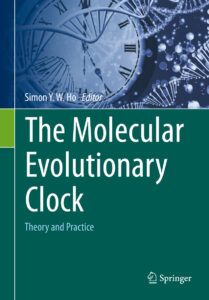